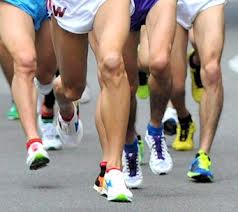 A recent study published in Med Sci Sports Exercise (September 12, 2013 (Epub ahead of print) compared the forces that were generated (knee joint loads) while running to walking over the same distance in a small group of healthy adults. Although the peak load was three times higher in running, the relatively short duration of ground contact and relatively long length of strides in running were no higher than in walking in total per distance traveled.

The authors point out that runners do not have an especially high risk of knee OA compared to non-runners. Is this the reason why?

Walking is considered a low-impact activity and many physicians recommend walking for their older patients for both cardiovascular health and as a safer alternative to running. Previous studies had pointed out that running does not substantially increase the risk of developing hip arthritis and does not predict the future need for a total hip replacement. When compared to people who were less active, they had less overall risk of developing arthritis that people who were less active. However, until now, no one has compared the forces generated in an attempt to explain this paradox.

The primary author of the knee study says that their results are not an endorsement of running for knee health. Runners frequently succumb to knee injuries unrelated to arthritis, he said, and his study does not address or explain that situation. One such ailment is patellofemoral pain syndrome (runners’ knee).