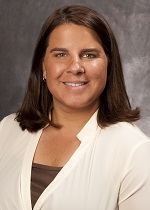 Bobbi Pineda: I am a research scientist committed to developing interventions that optimize neurodevelopmental outcomes in high-risk newborn infants, specifically infants born prematurely. I have more than 20 years of experience as a NICU-based occupational therapist and 10 years of clinical research experience in the NICU at St. Louis Children’s and Barnes-Jewish Special Care Nursery. From my previous work, I have a successful track record of publications documenting the effects of environmental factors such as room type (open ward compared to private room), parent presence and holding, neonatal positioning, stress related to medical interventions, sensory based interventions in the NICU, the auditory environment of the NICU, and early therapy services in and outside of the NICU.

My group has identified a developmental disadvantage among infants in the NICU private room compared to the open ward. Subsequent studies identified significant differences in the sound environment in open wards compared to private rooms.  Currently we are engaged in work to implement an intentional amount of positive sensory exposures each day of hospitalization and to measure the effects of such positive, parent-delivered sensory exposures.  We also have published findings related to feeding, one of the most important occupations of infancy. More recently, we have developed a new feeding assessment, which is now available for research and clinical applications.  The Neonatal Eating Outcome Assessment is a developmental feeding assessment for use with preterm infants during the neonatal period.  I have also received funding to build a prototype of a new infant bottle, the Preemie Pacer, which aims to address issues of poor suck-swallow-breathe synchrony, which is a common problem in preterm infants as they start to orally feed.

Finally, other work in the Washington University OT NICU lab centers around bridging the gap in services from NICU to home, so that infants can continue to receive quality and continuous therapy services to improve health and well-being.  The OT NICU lab is part of Washington University, where I am able to mentor OT graduate students on neonatal therapy and aid them in conducting clinical research that can impact the lives of those who start their lives in the NICU.  In addition, many of these students are inspired to go on to practice in the NICU and make their mark on the field.

My long-term goal is to optimize outcomes in high-risk infants so that they can go on to lead productive and fulfilling lives.

There are just a few opportunities left to hear Bobbi speak in 2017:

Assessment and Intervention with the High Risk Infant in the NICU and During the Transition to Home
June 3-4, 2017 – Danbury CT
October 7-8, 2017 – St. Louis, MO
November 18-19, 2017 – Portland, OR
Please click her for detailed information to download a brochure or to register